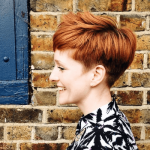 Owen - I had an image in my head that on my last day before going full time with Big Lemon I’d stop the car on top of Caerphilly mountain on the way home from work and sit for a bit to get some headspace. And I did, until it got too cold. I still think of that moment whenever I travel over that way. It’s hard to put it into words, but when you’re so set on achieving something and crave it so much, it feels kind of weird when you achieve it to actually stop for a minute and recognise it.

Kieran - Hiring Catrin in November 2016 was a big step for us as a business. Also winning the Caerphilly Business Forum Award in 2017 was a significant achievement after a tough couple of months, being recognised really revs you on.

Catrin - In July 2019 the team took a trip to Guernsey to work on site with a current client, MSE. It was an intensive product sprint. It was great to have a change of scenery, and it’s amazing the amount you can get done knowing a paddle in the sea was waiting at the end of the day.

Jack - I do enjoy our monthly team breakfasts!

Kieran - The now. Coasting is easy, having a plan and sticking to it is hard. Also that transitioning from being a designer to an ‘entrepreneur’, I’ve been a designer my whole professional career, it’s tricky learning ‘business’ and doing ‘business’ at the same time. Impostor syndrome constantly rears its ugly head. Oh and don’t underestimate how difficult it is to close a sale.

Catrin - When I first started working for Big Lemon I mostly did illustration work, making the transition to designing UI was tricky. It required learning a load of new skills in an industry that changes rapidly. I’m always learning.

Owen - The change of mindset needed as the business has progressed. Starting out with the objective of going full time, achieving that. Then getting used to working full time on something that’s in your control, to growing ambitions, trying to achieve that. There isn’t one way to achieve something, and coming to terms with that can be tough when you’re used to having answers served to you on a plate in a job.

Jack - I would say that the biggest challenge was first adapting to the demands of the job. Going from a background of doing mostly front end work on brochure websites to building large-scale applications, was a steep learning curve. I found the process rewarding.

Kieran - I’d love to somehow mix my love for the outdoors and helping others, so either an app for a bike park, or a trail centre, or working with a mountain rescue organisation to build something useful for them.

Catrin - Ideally something substantial that we could keep improving over time driven by the people using it. Make stuff that people really enjoy.

Owen - I’d love to work on a project with insane ambitions and the space to test theories and learn from it. Something with no preconceptions of how to achieve it technically sounds like a blast.

Jack - I really enjoy the process of building efficient and maintainable front end systems. So any project that allows me to do that, I'm game.